About 75 percent of women get Uterine Fibroids (UF). UF are the cause of about 200,000 hysterectomies per year. Black women are two to three times more likely to get UF than women of other ethnicities (Axe, 2017).

UF are non-cancerous tumors that grow inside a women's uterine wall. They can range from a few millimeters to the size of a watermelon (2017).

There are different types of fibroids that women get. Here's a list and a description of each: 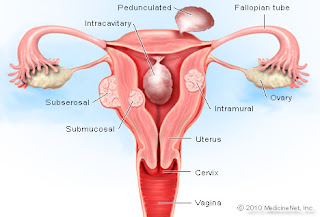 Certain foods may make fibroids worse, so try your best to avoid them. These foods are:

There are ways to possibly ward off and treat these growths naturally, yet this isn't information that we get from most doctors. Here are some foods that you should include in your diet that may help keep fibroids at bay:


There are many different treatments for fibroids. The one that's best for each woman will be based on many factors. Here's a list of those treatments:


All of these procedures come with some types of side effects, so it's important for you to ask lots of questions and do your research. Talking to other women who have had these procedures can be very helpful. You have to figure out which is best for you.

I suffer from Uterine Fibroids. They have caused me severe bleeding during my menstrual cycle, which has affected my quality of life. I would have to change within every hour for the first two days of my cycle, because my flow was that heavy. This is with using a super-plus tampon and overnight pads (both heavy duty protection), together. I would also bleed for weeks, and at odd times.

My heavy loss of blood also caused me to become anemic, but I was able to eventually fix that by taking iron pills. That was an ordeal because for a while they made me too sick to take, but I figured out that it was because I drank so much soda. Not while taking the pills, but at that time I drank so much of it, it still affected my digestion of iron pills. When I stopped drinking soda, I had no problems taking the pills, and I took them following a meal; this cured my anemia.

I was given many options, and the ones with hormones I stayed away from because I have had negative reactions from hormones in the past; they would cause depression. Other options were suggested, but I felt that they weren't for me. So the first option that I looked into was the Uterine Artery Embolization, but I was not a good candidate because my fibroids are intramural, subserosal, penduculated, and submucosal. AND some were very large which made it possibly dangerous to have this procedure. I was not denied it, but I didn't want to take the chance of the possible side effects.

The next option was to take the medication Lysteda. This caused heavy clotting, but it reduced the bleeding and helped improve the severity of my menstrual cycle. This medication became unavailable for a while, so I needed another option.

I had a new doctor on my case, and she went over all of my options again, and she assured me that the IUD didn't have the hormones of the past and she felt that it might be a good option for me. I was elated by the thoroughness of the information that she gave me, because I was beginning to think about a hysterectomy. Something that I told myself that I would never do, unless it was to save my life.

I agreed to having an IUD inserted in hopes that it would help to reduce my periods, and it did. My quality of life improved, so I was able to go swimming again, and I didn't have to cancel plans when my period came on. The plan is that by the time it's time to remove the IUD (which is about 5 years), I will be well enough into menopause that they will start to shrink naturally.

So, my advice would be to find out about all of your options and do your research if you suffer from UF. Make sure that you learn about all of the side effects of your options, because that is important. I hope this article is helpful, and I wish any woman that suffers from this condition the best of luck in choosing a treatment.